After four gruelling days, CBBC’s Karim, Radio 1’s Nick Grimshaw and the other five celebrities trekking through the desert have made it to the finish line!

The Heat is On challenge involved hiking 100 miles (160 kilometres) across the Namibian desert in Africa to raise awareness of mental health for Sport Relief.

The stars travelled on foot and used special sand bikes and skis for their journey.

The rest of the team were Frankie Bridge from The Saturdays, news presenter Krishnan Guru-Murthy, BBC Breakfast’s Louise Minchin, Judge Rinder and Samantha Womack from Eastenders.

Nick Grimshaw missed the second day due to heat exhaustion, but he and the whole team managed to make it to the finish line on Friday. 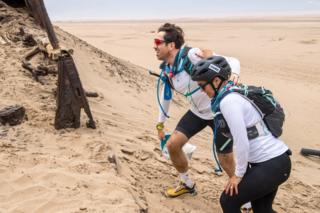 “There are lots of times in my life where there are things I haven’t wanted to do and I just haven’t done them” he said at the end of the brutal trek.

“This challenge has made us all pull together, I am so glad I did this.”

CBBC and Strictly’s Karim said: “That was by far the hardest thing I have ever done, but it is also by far my proudest achievement to date.” 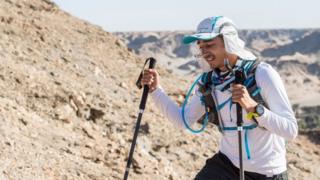 The team had to walk for more than eight hours a day, battling temperatures of 35 degrees Celsius.

You will be able to see the team’s efforts on the night of Sport Relief on Friday 13 March.